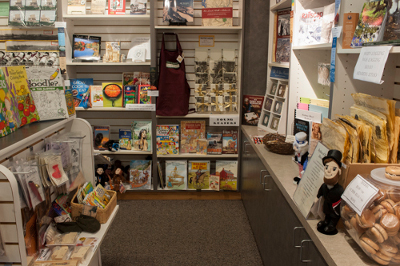 The Museum Store offers a wide assortment of fascinating books on the history of Cowlitz County as well as Washington State and the Pacific Northwest.

History is Fascinating!
Buy a Good Book for Yourself or as a Gift.

Local Books and Items of Interest

VERY LOCAL - New to the store are notecards depicting grain art from the museum's collection. These cards future pictures of original Long-Bell grain art which was mostly produced in the late 1920s by sand blasting Douglas Fir or Cedar veneer panels with a stencil placed on top. The sand would strip away the uncovered wood but leave that part covered by the stencil untouched, producing beautiful and unique art. Many of the Long-Bell grain art panels featured images of logging and Pacific Northwest scenery, making them distinctly local. Another locally flavored specialty in our store is handcrafted Seely mint teas and chocolates, made from heirloom peppermint and native Oregon spearmint grown in Clatskanie, OR on the Seely Family mint farm.

Are you a train enthusiast or maybe just a little squirrely? We are currently carrying both the Longview Shay shirts and the Nutty Narrows Bridge shirts, complements of The Friends of Longview who are fundraising to finish installing Long-Bell shay #5 at the Longview Public Library. We carry shirts in a range of adult sizes and some children sizes, and also have several infant Nutty Narrows onesies. If you don't find what you're looking for, we can put in a special order with the Friends of Longview.

We have recently restocked a local favorite, Lake Sacajawea: Longview's Treasure, with photography and text by Travis Cavens. Also back in stock is Carl G. Devin's Corman Road Area: A Study of Assessor's Plat No.10 Longview, WA. Don't miss out on another local classic, A Drive in the Clouds: the Story of the Aerocar by Jake Schultz in cooperation with Aerocar pioneer Molt Tylor.

We still have When Logging Was Logging by several local authors including Karen Bertroch and Jim LeMonds. We also have Mr. LeMonds' Deadfall, a fascinating book about generations of logging in the Pacific Northwest.

Interested in learning about local native legends? Legends of the Cowlitz Indian Tribe by Roy I. Wilson is a book that may be of great interest to you. Mr. Wilson, honorary chief and tribal spiritual leader, has written many other books as well; feel free to ask us about which ones we have available at the museum store.

From our June First Thursday program we have A Yankee on Puget Sound: Pioneer Dispatches of Edward Jay Allen, 1852-1855 by Dennis M. Larsen and Karen L. Johnson. This is the second of two books; the first, which we also have in our store, is Our Faces are Westward: The 1852 Oregon Trail Journey of Edward Jay Allen written in coordination by Mr. Larsen and Ms. Johnson. Mr. Larsen was our guest speaker in June where he discussed his new book about Mr. Allen who emigrated from Pittsburgh to Olympia by way of the Oregon Trail, stopping along the Cowlitz Trail to attend the Monticello Convention. While the first book covers Mr. Allen sharing his experiences of the Trail, the second brings to life the early days of Pioneer community life in Washington's Capital. We also have one of Mr. Larsen's earlier books, Slick as a Mitten: Ezra Meeker's Klondike Enterprise. Ezra Meeker also made the Oregon Trail crossing in 1852, living in St. Helens and what would eventually become Kalama for a time before finally settling in Puyallup, from where he made his Klondike expedition.

Looking for a heartfelt gift to start a family history of your own? Check out our series of Tell Me Your Memories hand sized day journals. These special little books have many questions about your life story for you to share with generations to come. We have ones for Grandma, Grandpa, Mom, Dad, friends, and your own memories.

For our young readers, the Lewis and Clark section has been expanded to include Travel with the Great Explorers: Lewis and Clark by Rachel Stuckey, which looks at the voyage of the Corp of Discovery as though reporting for a tabloid. Also new is Lewis and Clark - Opening the American West by Ellen Rodger which is from a series called "In the Footsteps of Explorers". We also have James Cook - The Pacific Coast and Beyond by R.A. Beales from the same series.

Another new book to our young reader section is Make Your Own Movie Machine by Rob Ives, which is an excellent activity for any young inventor. Also of interest for these young visionaries we have Inventions and Inventors: How American Discoveries Changed the World by Darren Sechrist and The Revolution in Industry: Machines that Changed the World by John Perritano, both of which are full color graphic novels. A third book from the same series, Westward, Ho! : How American Expanded, also by Darren Sechrist, is a new addition to our Pioneer section for young readers.

Our toys include entertaining propeller "sky tops", drop spindles, spinning tops, and of course our merry bags of marbles that include four front-to-back pages of different game instructions to play with family and friends. We have die-cast pencil sharpeners, replica historical documents, and wood, straw, and cloth ornaments. Come and check us any time from 10am to 4pm, Tuesday through Saturday. We look forward to seeing you!