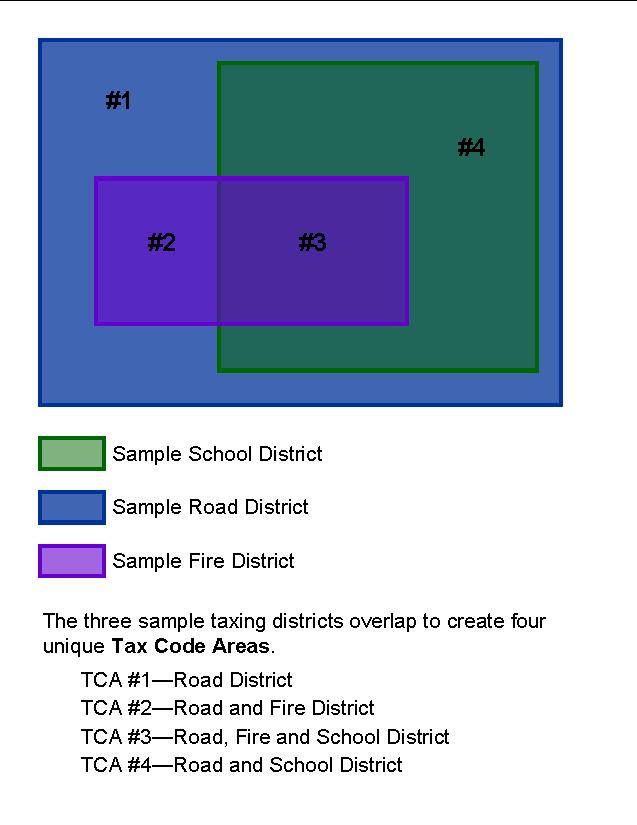 To most taxpayers in Cowlitz County, taxing districts include the State, the County, either the County Road Department or a City, Schools, Fire Protection, Ports, Cemetery, Library, and Emergency Medical Services. Other counties in Washington also have districts for hospitals, parks and recreation, airports, ferrys, and other jurisdictions authorized by law to levy for taxes.

It is easy to calculate the levy rate for a single taxing district using the Simple Levy Process. To calculate tax for 50,000 taxpayers within dozens of overlapping taxing districts in various combinations, the 'simple' process becomes a little more complicated. The problem is two-fold:

The Assessor has maps of the individual types of districts. Each map shows a different type of district, i.e., cemeteries, roads, ports, schools and fire districts. If you overlay all of these, you have the final tax code map. The Assessor keeps track of all taxing district boundaries. All changes are sent to the Department of Revenue whose responsibility it is to keep track of levy maps for every district in every county in the whole state. The Department of Revenue makes the changes to the official county tax code map and sends a copy of it to the county once each year. Changes may result from annexations, mergers, new districts, etc.

The Assessor keeps track of each parcel by tax code area numbers. We sum all the parcel values for each tax code area to get the value of each individual taxing district. We do this for all districts at the close of roll and again when levies are set. Since taxing districts are allowed by law to collect a specific tax rate on the total value in their district to do their business, they use this data to prepare their budgets. When we calculate the tax rates for all the districts, we sum the rates that make up each tax code area to get the consolidated (or combined) rate for all its parcels.